Between 2003 and 2006 Wakefield Libraries & Information Services supported the BBC-led project 'WW2 People's War', which asked the public to contribute their memories of World War Two to the website at http://www.bbc.co.uk/history/ww2peopleswar/. The following extracts are quoted from stories contributed by Ossett residents.

Halvor Tasker photographed in 1940 with a commemorative spitfire badge on his lapel.

"[...] The line of ten high explosive bombs that landed in Ossett landed between the houses. Additionally, approximately twenty incendiary bombs drifted into Gawthorpe and Flushdyke yet no one was killed and there was very little report of injury. Local people said it was a miracle. I think it was in thankfulness for this that our neighbour opened his damaged garden in aid of the war effort.

At his gate a gift was given (I think it was for "Wings for Victory") and in return a tiny painted metal spitfire was received."

In a note passed to Mike Adams of Ossett and Gawthorpe Community Archive, to accompany the photograph above, Mr Tasker also writes:

“1940 – I received this model spitfire (on my lapel) at the site of the 10th high explosive bomb dropped on Ossett on 16th September, 1940. I gave a donation to go into Mr. Brear’s garden, which was “L” shaped and wrapped round the front of our garden. We lived next door and were nearest to the blast. I gave a donation to receive the Dinky model Spitfire, as many people did, as they observed the crater. For further information see the “Ossett Observer” for 19th September, 1940 (front page)”.

If you'd like to find out more about this story, why not do as Halvor Tasker suggests and look it up in archived copies of the Ossett Observer, which are available on microfilm at Wakefield Local Studies Library. See http://www.wakefield.gov.uk/residents/libraries-and-local-history/local-and-family-history/local-studies-library for further details.

Copies of the Ossett Observer are available on microfilm at Wakefield Local Studies Library.

Find out more about how residents of Ossett and Horbury raised funds to pay for a spitfire on Ossett.net at http://www.ossett.net/twentieth.html

A shopkeeper cancelling coupons in a ration book, 1943

"The only restaurant in town in those days was "Griffin and Sayers" at the entrance to Kingsway. We would queue at the nearby Co-op shops for our rations, bread, meat etc and go to Bainbridges small shop on the corner of Kingsway for our ration of sweets."


I was born in Ossett in 1931 and lived with my parents and sister from the age of 1 in ‘Happy Land’, Station Road (now the site of Dunstan Close). I attended South Ossett Church School through Primary, Junior and Senior departments. During the early part of the Second World War an Air Raid Shelter was constructed on the land at the rear of the school to accommodate pupils and staff in the event of enemy air raids. It was considered that at least 10 minutes would elapse from the warning siren to the actual attack. At my school, parents were given the choice of having their children use the school air raid shelter or, providing the child could reach home in the stipulated 10 minutes, being allowed to go home to shelter with the family. In order to ensure that this was possible time tests were carried out. I took part in this and when told to start my route took me via Vicar Lane to Manor Road, crossing Manor Road, running across a cornfield (now playing field) behind the Co-Operative shops and jumping over the wall dividing the field from Happy Land and King Street to home. I managed to make it in time!

From A story about being a school child in WW2

"I was then a pupil at Spa Street Primary School down Baptist Lane, Spa Street, Ossett and one of my earliest recollections of the war was when we all had to practise running home as fast as we could to see if we could get home in time after the sirens went and before the raids started."

Mary Hartley, 'Through the Eyes of an Ossett Girl', http://www.bbc.co.uk/history/ww2peopleswar/stories/19/a3353519.shtml 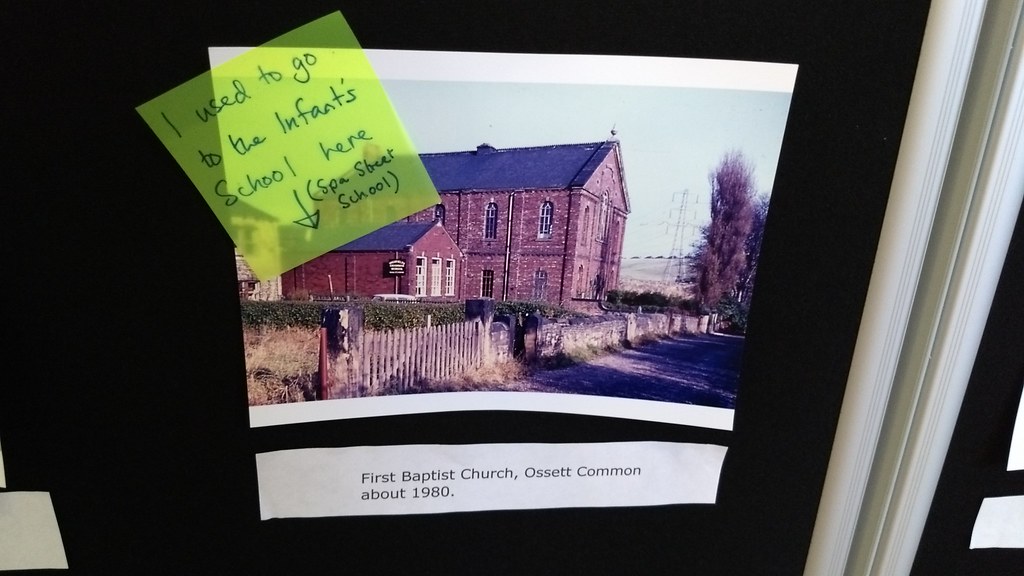 An image of Spa Street School on the 'Weaving Ossett's History' display boards at Ossett Gala 2017.

Westfield Mill, used as a temporary barrack during the war.

"[...] Another aspect of the war was that a large number of troops - Royal Signals - were stationed in Ossett up Wesley Street at Westfield Mill (now Millfields Housing site). They used to use the Church Street recreation ground, next to the school, for P.T. and Sport. I remember going up Wesley Street to look at the 'Barracks'. There was a Sentry Box at each entry.

In the summer Ossett Centre was packed with troops on an evening. My Uncle John
(John Macauley) had a Fish and Chip shop on Bank Street. Having married my father's sister, who was originally from Glasgow, a plumber by trade, but he decided to come to Ossett before the war and open up the fish shop on Bank Street as "jocks".

During the war he did a roaring trade because at the rear of the fish shop he had a "supper room" (not a cafe) where you could get fish and chips, peas, tea, bread and butter at lunchtime and evening. The troope patronised the supper room at night and my Uncle John used to get extra rations for providing this service. Incidentally, John's daughter (my cousin Joyce) who worked as a waitress in the 'supper room' ended up marrying a soilder from London who she had met there."