Some time ago I researched the history of a “corner shop” in Ossett that had been run by the same family for 115 years. I was recently contacted by Joan Barras who, with her late husband Jeffrey (to whom this story is dedicated) were the last members of the family to keep it. Together with one of their regular former customers, Lynda Goddard, I met Joan and we had a chat and she was able to tell me more of the story. Here it is.

Jeffery and Joan Barras in their shop.

The shop at 155 Wakefield Road, Roundwood, Ossett belonged to the Bickel family. In 1897 William Henry Simms and his wife, Sophia Ann (nee Brodhead) started their corner shop there. In 1916 William took over the licence for the Malt Shovel Inn on Haggs Lane on the other side of Dewsbury Road opposite the shop. He handed over the running of the shop to his daughter Emma Jane and her husband Taylor Barras. Eventually the shop was taken over by their daughter, Elsie and son, Jeffrey. When Jeffrey and Joan married in 1959 Joan (nee Lithe) started working in the shop with him. She remembers her first sale, a pink sugar mouse. In 2012, when Jeffrey was about 80, they decided to give up the shop and this ended the 115 years of shop-keeping by the family. The family running the shop had always lived in the three bed-roomed terrace house next door. Taylor Barras and his wife had lived there with their six children. Jeffrey had been born in that house and so the decision to give up the shop and move to a house nearer town was a very difficult one for him.
Joan remembered the Roundwood Miner's Gala, which were held in the field at the back of the shop as being "lively affairs".
The field at the back was owned by MacAulay's (rhubarb growers) who's rhubarb fields went over from here to Leeds Road at Newton Hill around the site of the present "Rhubarb Triangle Pub". The Dewsbury Road field was probably at the edge of the "rhubarb triangle".

Photograph courtesy of Wakefield Libraries Twix Aire and Calder.
In the middle of this picture of the Roundwood Gala in 1954 is a small corner shop with living accommodation, on the outskirts of Ossett.

Taylor Barras, Emma Jane's husband, with his horse and cart.

Jeffrey Barras with his camera at the nearby Roundwood colliery on the day they demolished the pit head. 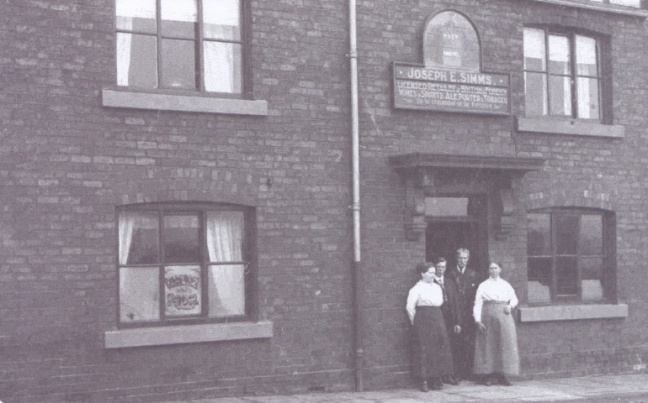 In 1916 when William Henry Simms moved into the original Malt Shovel Inn it stood at the end of Haggs Lane with its front facing towards Wakefield. The photo of William, his son, Joseph and two ladies outside the pub is included in the Ossett and Gawthorpe Community Archive and Joan was able to correct the recorded names of ladies to Emma Harrop (left, a cleaner) and Bella Simms (right, Joseph's wife). The property had been built as a private house with stables and outbuildings and stood in an acre of grounds. In 1800 it was owned by Hannah Burnett. It appears to have been a pub since 1800 but the first known landlord was a John Foghergill. It was licensed by Ossett Justices from 1903. William Henry Simms handed the licence to his son, Joseph in 1921. Ossett Justices approved the rebuilding to present design in March, 1937. Before 1903 it had come under Alverthorpe cum Thornes.
Around 1970 the name became the “Sports” and around 1985 the “Frog and Firkin”. It Changed to its present name, The Old Malt Shovel Inn, about 1997.

In 1924 William was killed in a tragic road accident that was followed by a controversial inquest. This story comes later entitled "The Tragic Fate of William Henry Simms".