This is the first story in a series of reminiscences by Margaret Wilby of her life in Ossett. It has been written by her from a recording made of a chat with Mike Adams of the Friends of Ossett Library. It tells of her early life whilst her father was in the army in WW2 and his return home.

The recording of Margaret's reminiscences of this story can be listened to at the end. It was simply made at home on an iPad, hence the mobile phone “pings”, etc.

Sydney Brammer. Father of the author. In uniform of the Army Medical Corps.

My first story is about the return of my father, Sydney Brammer, from service in the army in 1946. Before he was called up he was the manager at the Flushdyke Branch of Ossett Co-op. Because of his age he was not conscripted until 1942. He started his service in May 1942 and I have no memories of him at all until he came back in June 1946. It wasn't until just a few years ago that I realized that I was effectively brought up in a one parent family until the war ended. I always thought I had had a very stable, ordinary background but it wasn't really. My grandfather on my father's side of the family was killed in 1917 and I realise now that, to my parents, the Second World War seemed very close to the First World War and I think they both thought that history may repeat itself and my father too may not survive his war.

This is a photo of Sydney at the Italian POW camp in North Africa.

In the background on the lef is an open air theatre built and run by the POWs.

Early in his service he embarked as a member of the Tank Corps. He was on his way out to the Far East but was rather puzzled why he was so much older than anybody else in the group that he was with. I don't know how it happened but when they got part of the way there, someone realised he was too old to be doing what they were going to ask him to do. The others were a different age group, all about18 years old, just young lads who carried on out to the Far East. He was left in East Africa and because he had St. John's Ambulance training from his civilian days he was suddenly moved into the Army Medical Corps. He was left in Nairobi and he spent all his time from 1943 until 1946 as a medical orderly in a prisoner of war camp that was housing Italians who had been captured and brought across. It was traumatic for our family particularly my mother. She found it very hard because she said that when she got a letter it had may have been written three months before so she didn't know whether at the time she received it he was still alive or not. She got a sort of comfort really from getting contact with him through his letters. I think it probably was quite a "good war" for him because of the situation in which he found himself in East Africa. He brought lots of African made presents back with him and made many friendships amongst the Africans and the Italians as well as the people he was serving with. If someone was unfortunate enough to become a prisoner of war, they could not have done better that to have been in the care of my father.

This article gives some information on Italian POW Camps in North Africa during WW2. 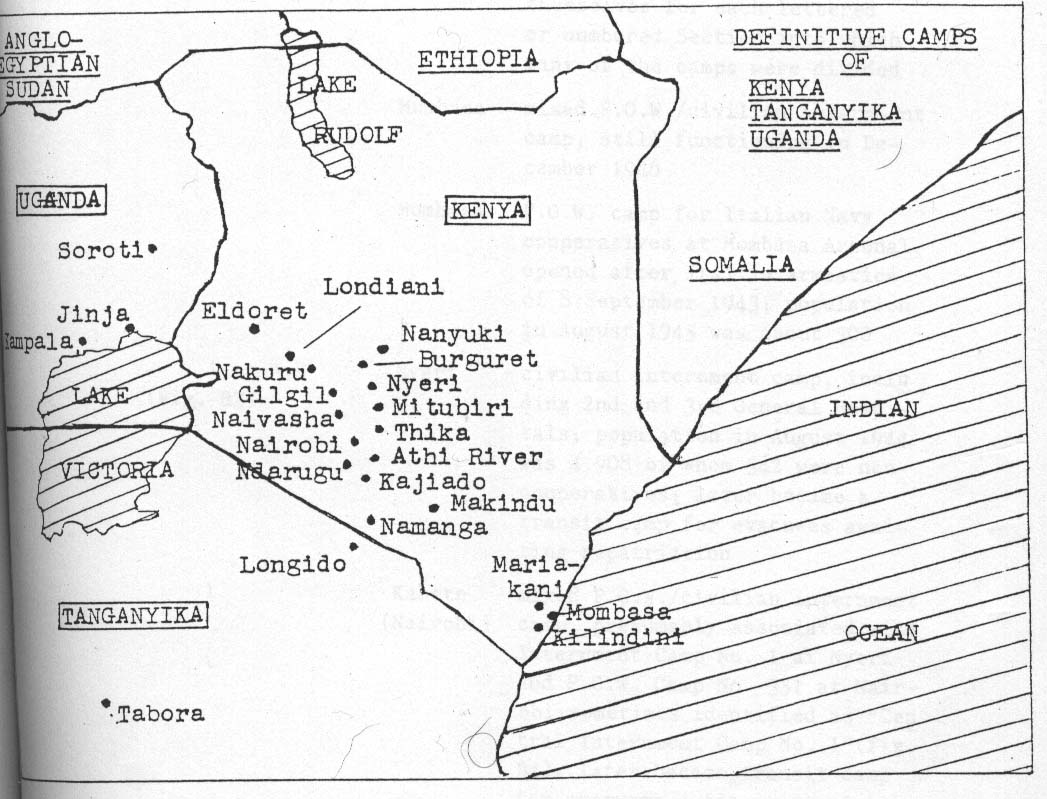 During his leave he went to Lake Victoria and Mombasa and various other places in Kenya and Uganda. On these trips he took lots of photographs of animals, quite exotic creatures and had lots of amusing stories. He made real friendships amongst the Italians. I mean, "Who is your enemy?" The prisoners were just ordinary people caught up in war as he was. I know that there was one man who was something of an artist. My father arrived back with quite a large portrait of himself painted by this man and the family still has it together with some oil paintings of imagined , English scenes. I knew my father was in Africa but I had no concept of what "father ". Because he had to wait for the Italian prisoners to be repatriated ,he didn't come back until June1946 and was officially demobbed three months later . Whilst he was in the camp, because he was European/English, he wasn't allowed to do his own washing. He had to have an African
"boy" attached to him. This "boy" was, in fact, a married man with a family and lived locally. He did my father's laundry and general tasks and I think my father found it quite embarrassing as he was such a gentle person who would not want to dominate anyone. He laughingly told us that every time he wanted clean socks from his "boy" there were holes in them and he had to requisition another pair from stores. This went on happening and happening for ages until he realised that the African and his family were wearing dad’s new socks and returned them when they needed replacing. My father obviously missed his family and since we were so young he did drawings for us which he sent when he could by airmail.

I didn't really miss him because I had never known him. In 1943 we had moved from Ossett to live with my grandparents in Lupset. However we kept the house in Ossett throughout the war always in the hope that next week Dad would be back and we could return home. Every Wednesday for over three years, instead of going back to my grandma's, when my brother and I finished school we went to our Ossett house and my mother would have opened every window and cleaned our home from top to bottom . During this time it was never occupied . We just locked it up each teatime and went back to grandmother's because my mother needed that support.

I think my mother had decided father was not coming back and she was preparing herself for the worst but then one day a taxi arrived outside the house where we were living with my grandmother and grandad to take us to Kirkgate Station. I still don't recall my mother saying why we were going there. I remember the train stopping. My brother Douglas, was there and he would have understood better because he was two years older. The train pulled in and a man got off with a lot of others and my mother ran down the platform dragging us with her and he ran towards us. He had his African light-coloured tropical uniform on. It was a light, sandy colour. He whisked us up, one in each arm, to kiss us. I remember him pulling us up to him and bumping my eyebrow. I made such a fuss of this because I was so embarrassed. I did not know who he was.

We got in the taxi and went back to Lupset to see grandmother and have something to eat and then in the evening , because you could not be extravagant twice in a day, we came back into Ossett on a bus. I will never forget this because in those days, as always, you could not smoke downstairs in the bus. Father was never a big smoker but when we got on the bus at Lupset it was quite full and he lit a cigarette. A man sitting across from us my father happened to know because he lived nearby. This man had changed his occupation during the war to avoid service (protected occupation) and he leaned across to my father and tapped him on the arm and said ,"Put it out." I remember my father, who was a gentle person, was so hurt. He said "Is that who I've been fighting for?". He thought it was really uncharitable.

As a family we had lost four years but I soon got to know this lovely man. He came home with a brown demob suit which my mother absolutely hated. It was the only brown garment he ever wore in his life. She could never understand why he had chosen that colour. He said it was all there was,

He brought home his chocolate ration from all the time he had been away and I wish I had asked him how he had kept it in such good condition. They were in only slim, small, wrapped bars of chocolate. I had never tasted chocolate before. He had carried it in a wooden suitcase with his number and name stencilled on the outside. He also brought me back two, black dolls and a small lion-skin shoulder bag. My mother got a gazelle skin handbag so we all received our presents and trophies.

Because for three or four years he had put away his weekly chocolate ration he brought a lot home. I used to attend Flushdyke School and stay for dinners but I had a friend, Freda Lodge who lived across the road and when we had eaten our lunch I used to say to Freda, "Shall we go home to get some chocolate?" Father used to go home from work for an hour's lunch-break. We crossed the main road, went home and collected some chocolate nearly every day until it ran out. Nobody ever said anything about us going home so it must have been acceptable in those times for children of six and seven to do such things. The chocolate was so precious and seemed like ambrosia. It was bliss and tasted unlike anything we had before or since. It was so special. It was magic.

The recording of the chat between Margaret Wilby and Mike Adams of the Friends of Ossett Library about her father's homecoming from WW2.