We have built our world to be square, largely for the sake of practicality. Buildings are constructed to fill square plots, and have square rooms with square walls to arrange our mostly square furniture within.
In this story, I intend to explore examples of those daring enough to build outside the box-format, and the design potentials this offers, both aesthetically and functionally.
My findings will be collated for use in designing my own circular dwelling, that will (hopefully) prove the effectiveness of the circular space.

Celtic Round House Model on display at the House of Manannan, Peel, Isle of Man

In the Iron Age, the Celts built roundhouses. These were usually farmhouses and could house an entire small farming community. On a recent visit to the House of Manannan, an excellent Celtic and Viking museum on the Isle of Man, I became entranced by the beauty of the layout and practicality of the roundhouse design for the people who built them.

Like many ancient dwellings, the circular design originated from the primary need to keep a heavy roof up. Strong oak posts were used to hold up the conical roof, which was packed with turf for insulation and to disguise the roundhouse within its landscape. This was quite a feat of engineering, considering the largest roundhouse construction is understood to have been approximately 27m in diameter (that’s almost 3 double decker busses end to end!). You might be interested in this link- The Yurt is one of the oldest forms of round house. https://en.wikipedia.org/wiki/Yurt#/media/File:Syr_Darya_Oblast._Kyrgyz_Yurt_WDL10968.png 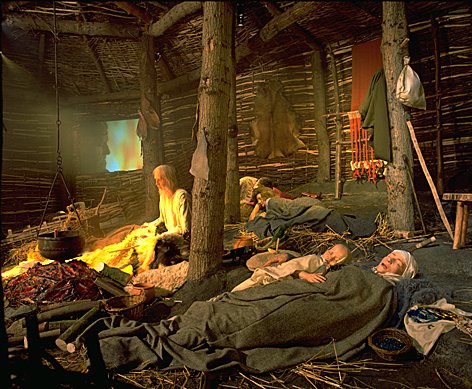 An interactive exhibit at the House of Manannan where you are sat at the centre of a roundhouse, listening to an elder comfort a little girl with stories of the Celtic spirits.

Another standard feature of the layout was to place the fire at the centre of the circle. This fulfilled the practical function of heating the interior space proportionately. The centre of the circle would also naturally sit beneath the highest point of the roof, which would be left open as an escape for the smoke.

Roundhouses did not have windows, but then, working the land through the daylight hours, the necessity to see out from their dwelling would not have been necessary. Surveillance-wise, the livestock would also be kept under the same roof in the outermost parts of the circle, separated by weaved wooden walls of ‘wattle’.

The overall layout of the interiors varied depending on the requirements of different communities, though most are known to have an entrance corridor that would reach part way into the central living space, and slope downward gently toward the hearth at the centre. Wattled sectioning was then created between the main oak posts for separate temporary rooms (drawing parallels the partition-wall layouts used in many modern office spaces).

Structurally, the inability to look out, put the focus around the centre point of the circle, leading to a culture of looking-in. Roundhouse dwellers would have perched around the fire in the evening to eat and tell stories, a feature of their culture very much celebrated in the House of Manannan’s interactive exhibits.

From a socio-political standpoint it would have likely promoted a sense of strength and equality in the community. Sitting in a round leaves no-one at the ‘head’ of proceedings and gives everyone an equal respect. This mentality is why ‘circle-time’ and sitting around the campfire work as great methods for team-building and social interaction.

An ultra-modern lounge area structured using many of the principles the Celts developed with the roundhouse.

A view of Trinity Street, Cambridge - without a decagon in sight.

"The lack of geometric imagination was startling. There was not so much as a decagon in sight. Though I did notice that some of the buildings were larger and - relatively speaking - more ornately designed than others."
The observations of an alien walking through the streets of Cambridge in 'The Humans' by Matt Haig