Thoughts about my idea…

I am struggling with the idea that with such advanced technology and the immediacy of which we receive such images, has such little effect on how we (should) react.

It seems apparent to me that it is the fact that we are constantly bombarded with images in every form every moment of everyday, that we have lost touch with what the images actually represent. The repetition of basically the same images, be it of war, famine or a natural disaster, have lost their ability to have an impact. We can receive the news in every format, on every platform; I can see images of the refugee crisis on Instagram or know about the most recent terrorist attack on Facebook.

It is the mixture of information which we receive which levels the whole spectrum of meaning. For example if I scroll through my Facebook home feed I will see photographs of my friends on a night out, images of a natural disaster, an article on feminism by the Guardian, all surrounded by countless advertisements which bring the meaning and the impact of the serious information.

I am excited about my idea as it gives me a chance to explore these ideas visually, rather than just writing about them.

To try and find inspiration I started looking through photobooks by Don McCullin and I watched his Documentary ‘McCullin’ on Netflix.

a couple of quotes...

"You can't go around kidding yourself that your photographs in a few papers will change the world. They can't and they haven't. I despair about the human race. The press only shows the bums, the killers and the arms dealers and people like that. Good news never sold a paper.” – McCullin

“Our once great newspapers, which told us what went on in the world even when we couldn’t affect it, have become instruments of a promotional culture, little more than catalogues advising us what to consume. This is not a great age in which to be a photojournalist.” – McCullin.

I was inspired by what McCullin was talking about, and I think these two quotes capture the essence of what I want my project to be about, adding further to what Sontag wrote about our ‘image-choked world’.

Feeling so influenced by McCullin, I started to think about choosing 5 of his most iconic images and having a go at recreating them myself. As I poured through his books I got the sudden feeling that if I attempted to re-shoot some of the photos I might be being insensitive or disrespectful to the subjects in the image who has gone through these things in reality, rather than just posing for a photograph.

After voicing my concerns to Simon, I began to feel more comfortable and confident in the project as I knew that, whatever images I wanted to recreate, I would do so with sensitivity and for a good cause.

However, I decided not to continue with the idea of reconstructing the work of McCullin, as I thought it would be difficult to practically find the right models, props and settings for such photographs, which are mostly of war. 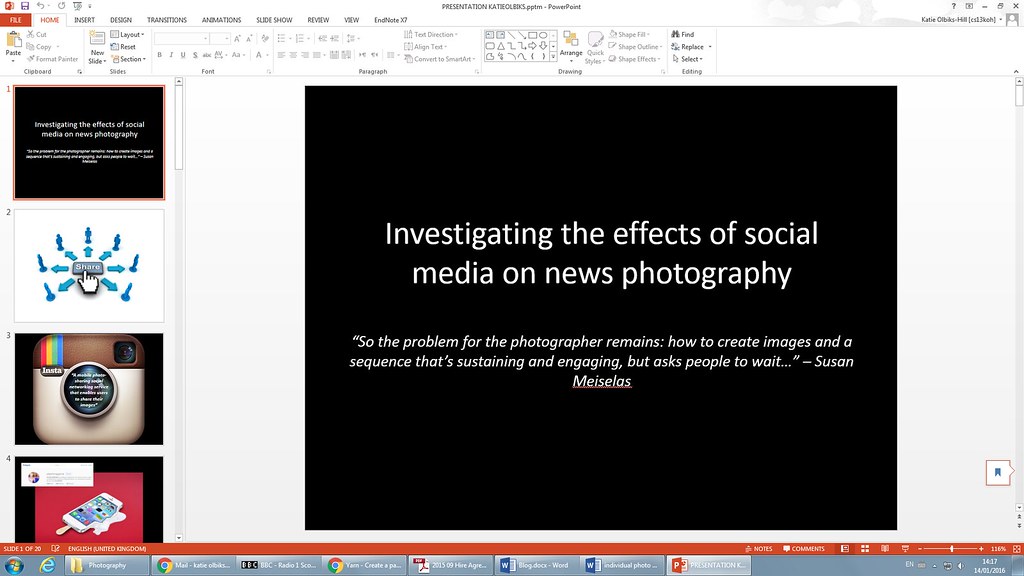 In our lecture we were each asked to present our 'idea so far'.

I found this to be a very rewarding exercise as it forced me to gather all my ideas and research and present it in a concise way, which was very helpful in giving me a clear idea.

It also gave me the chance to pose questions to my peers about what to do about any problem I was having i.e. what I should take photos of.

It was suggested that I could pick one event and see if I could find images that had been taken from different places by different people at the same time, to convey many perspective of the same event.

I liked this idea because it showed how one event could be 'captured' multiple times in the media to create a spectacle and connote the ridiculous amount of images that are taken.

To recreate images from the terrorist attacks in Paris as it had been thoroughly covered by the media and there were many images that people would recognize. There were multiple attacks and many stories from people that were coming out in the news which meant that there would be a wealth of emotionally charged images to choose from.

The events unfolded in the news just as Debord describes - as a spectacle - through the repetition of same images of people in shock, police men running and the sounds of gunshots.

I chose my photo's with a variety of different reasons in mind:
- what images might suit a certain 'app' best
- what the image represented e.g. grief, in the moment, shock, solidarity
- choose a range of different kinds of images
- how practical it would be to re-shoot the image 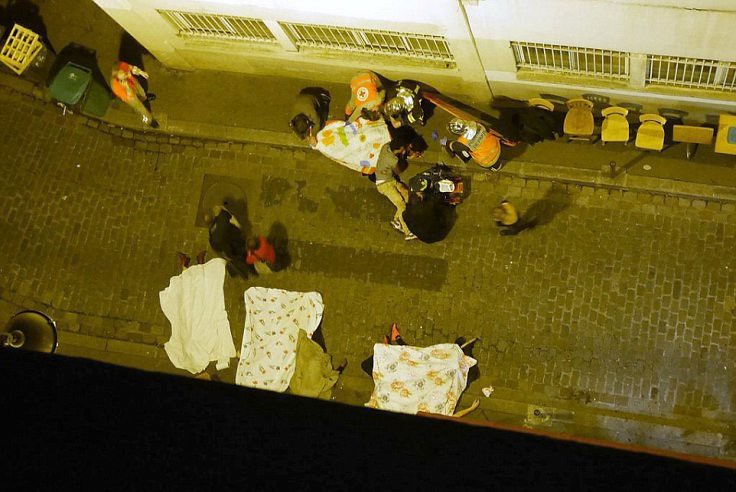 I chose this image for its 'shock factor' and its. Its extraordinary angle and height put the viewer right in the position of the photographer, and make it a kind of 'action shot'. The orange jackets with the crosses signify the paramedics and the state of emergency.

There is also a backstreet behind my house, so I can easily recreate the angle and composition of the photograph. 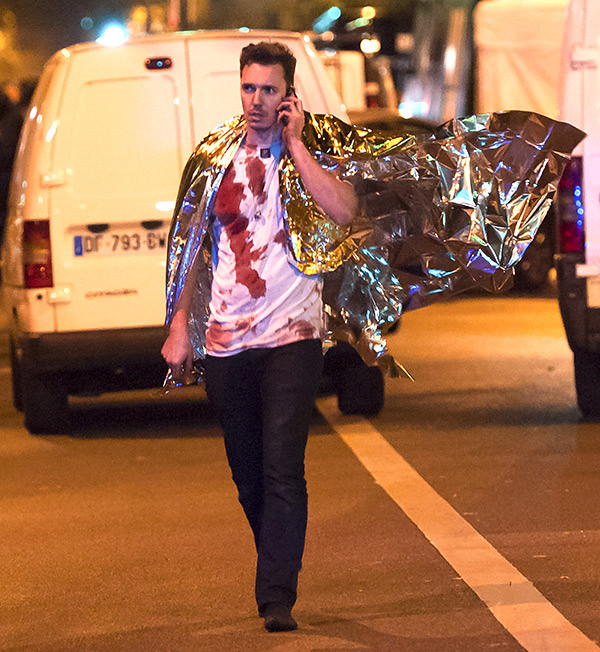 This is another shocking image due to the blood stained t-shirt and foil wrapped around the man. His look of concern and the situation in which he is in connote that this photo must have been taken almost immediately after the attacks happened. The immediacy of which I can use and work with in regard to the apps e.g. Snapchat 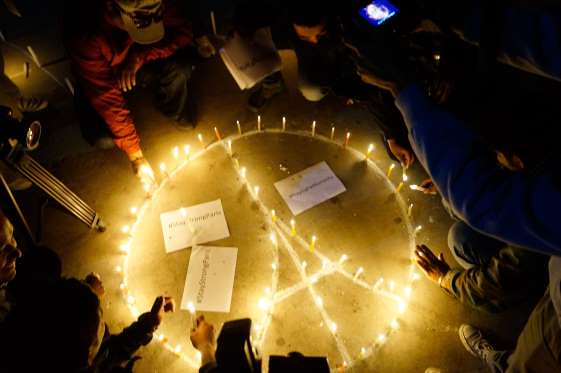 The image that has been illuminated by the candles of the Eiffel Tower within the peace sign became an iconic illustration that was shared all over social media after the attacks.

I have chosen the image as a contrast to the previous two photographs, in the way that it is a bit more of a calming experience (connoted through the warm color emitting from the candles) for the audience and makes them think about the victims who lost their lives. 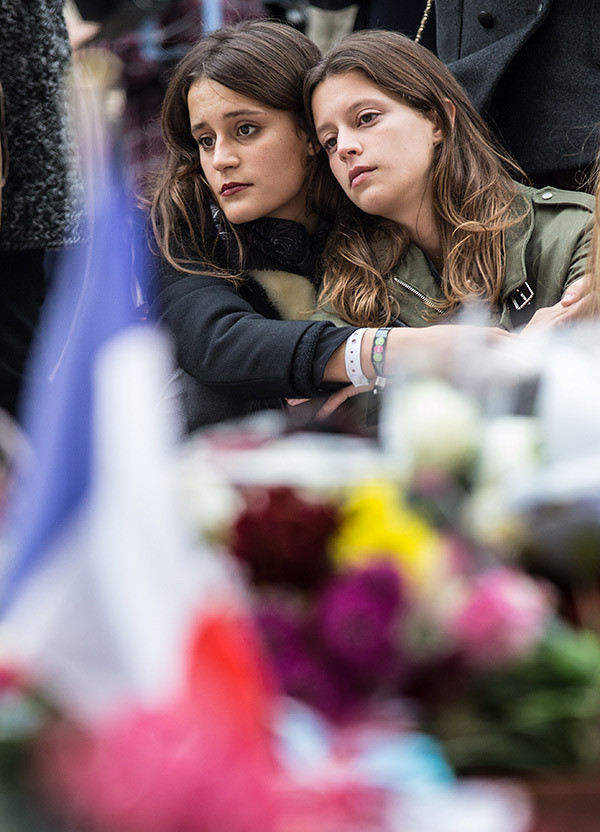 Again, I chose this photo to represent the thousands of people mourning loved ones in the attacks. Having two models in my images I hope will personify and give more meaning, and therefore have more of an impact then the iconography of the social media app is imposed over the top, to make more of a point about how social media is used in the news. 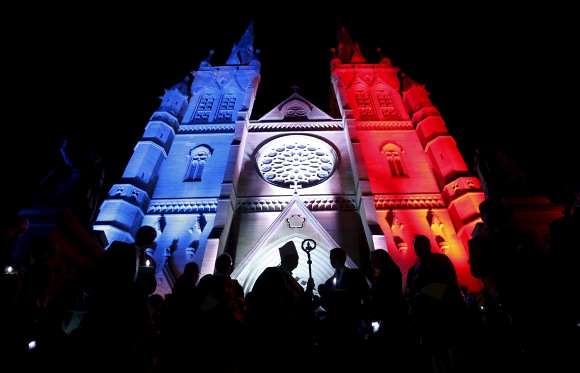 After the attacks you couldn't escape all the photographs around the world showing their support for Paris by shining the colors of the French flag onto the capitols iconic monuments and buildings, and this is why I have chosen this image.

I also think it as a shame that the flags of other countries, such as Beirut, were not shone at the same time, demonstrating the Western mass media's sole focus on Paris, and how other stories around the world became lost in the overflow of information. 
In preparation for my own photographs I bought the necessary props that I would need for the re-shoot. These included a large quantity of candles, chalk, tin foil, red paint and a white t-shirt.

I decided that I didn't want to mimic them perfectly, just a loose imitation so it would be obvious what the image was and what it meant, but that they really looked like my own photo's.

I was also coming to realize that this was going to be a project that would rely heavily on post production, allowing me to be more creative in post and giving me a bit more 'artistic license' when taking the original photographs.


Most of the photo shoot took place outside the back of my house, at night time under a street light, which provided perfect lighting for the majority of the images. Because I knew i could rely quite a lot on post-production I wanted my images to be simple and not forced. I was using the Canon 6D in RAW which produced excellent results.

First I drew the outline of the peace sign in chalk on the pavement and then outlined it with the candles I had bought and I had to quickly take the photo before the wind blew all of the candles out. Next I got my two housemates to pose, acting as if they were the two girls grieving in one of the photo's. After that I dressed another one of my housemates in the 'blood stained' t-shirt, wrapped tin foil around her and got her to walk as if she was having a worrying conversation on the phone while I took her photo. The last image at this location I took from my bedroom window looking down at the same road.
For my final image I went into Leeds City Center and took a photo of Leeds Town Hall, which I would make look like it had been one of the city's to show its support for Paris at the time of the attacks.