These are a few recollections by Ruth Nettleton, Chair of Ossett Historical Society of her memories of three local shops. 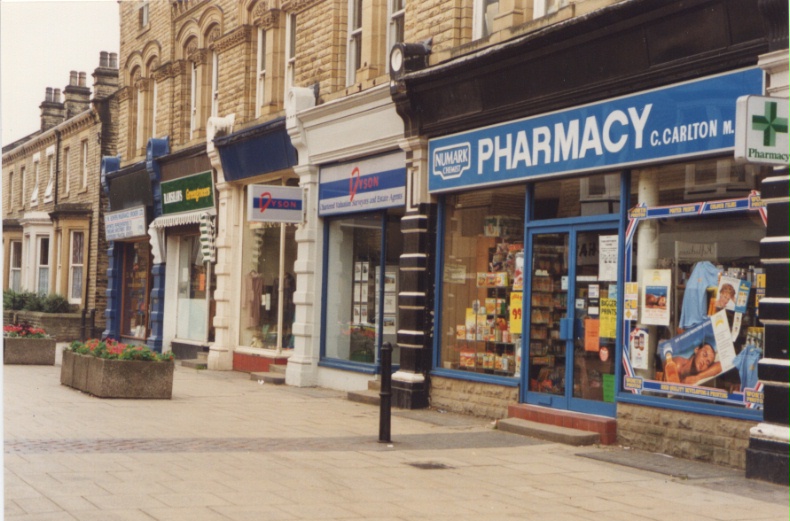 This is Carlton's shop as photographed by Ossett Academy 6th form students in their 2014 local history project.

Pre-WW2 this was the top class grocer’s shop in Ossett and was owned by Fozzards. They had a rep. who visited all the large houses and collected their orders which were then delivered. They roasted and ground their own coffee beans and the strong aroma emanated from the open cellar windows. I never tasted coffee until the age of ten when I had to make the mid-morning drink for the teachers at Southdale Elementary School.
During the war the Fozzard’s son, Lenny, was a P.O.W. From this interment his health suffered and he died shortly afterwards. The business was taken over by Armitages who had a small shop at the corner of Westfield Street and Headlands Road. The arrival of the supermarkets killed off their upmarket trade in the same way the local rag trade was affected by the extensive use of terylene mixtures.
Another shop belonging to the Armitage family was on Bank Street next to the George Hotel (on the Town Centre side). They sold fish, poultry and game. The shop had no window and was open above counter level. In season, a table with artificial grass covering was placed outside with boxes of fruit and vegetables. The shop was always referred to as “Fishy Willies” but neither the owner nor the man who served in the shop was named William. At night the shop was secured by a shutter which was pulled down.

"Fishy Willies" shop was the one on the left.

The white premises on the left are those of the Binks family. The low building was the shop.
The photo was taken by Ossett Academy 6th Form students as part of theie 2014 Local History project.

Grocers shop on the corner of Church Street and Dale Street (left hand side when leaving Church Street).
The photo shows General Booth of the Salvation Army visiting Ossett.

At the grocers shop that stood where the there is now a car park at the corner of Church Street and Dale Street they kept their biscuits in 12 ins cube tin boxes. During opening hours the airtight metal lid was replaced by a transparent, hinged lid to exhibit the contents. These boxes were usually kept on a ledge in front of the counter. It was often said of a mean person that “he would nip a current in two” but Joe Patterson, the owner, was renowned for breaking a biscuit in half to get the exact weight.