We went into the safe parks with a very specific goal: To educate the youths about xenophobia and to get them to engage with with this issue in their own communities. However what we found was that, yes, the youths were aware of xenophobia, but they felt that it didn't impact their lives in any significant way. Why would it? They are all South Africans living within marginalised communities that were shaped by the apartheid regime. These communities are packed full of issues that the apartheid government sought to hide from the white minority. These issues are not in any way related to race, but are commonly found alongside extreme poverty, poor infrastructure and sub-standard education. Therefore they were only exacerbated during the apartheid years, and subsequently in the 23 years since the abolition of the apartheid state, as these communities have received little developmental support. It is these issues that the youths have to face on a day to day basis. This left us in a dilemma; we had our own agenda, but we are working with vulnerable children who live in extreme conditions and therefore we could not dictate to them which issues were more important to discuss. We started the story telling process by asking the youths to create comics that touched on major issues that they face within their communities that would also provide some sort of solution, so that we would be able to facilitate a discussion that would centre on how we could work toward solving these issues from the bottom up. Before we tasked them with creating these comics, we of course had discussions with them about Human Rights and xenophobia, in an effort to try and steer their thoughts towards these issues. However when setting the task we were careful to leave the parameters open so that the youths did not in any way feel that we were trying to dictate our agenda to them. The following items are a few examples of what we got back from them. 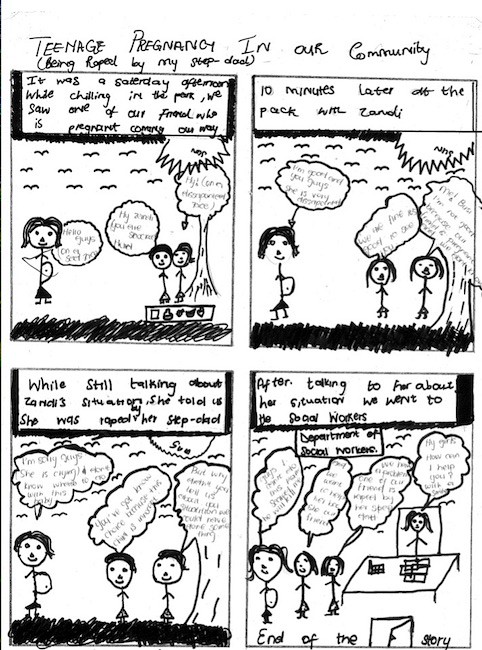 Teenage Pregnancy/Rape: This comic takes a different stance on teenage pregnancy as it is about a girl who fell pregnant after being raped by a family member. It encourages young girls in this position to seek support from friends and family as well as social support so that they do not feel isolated and may have a chance at finishing their studies.

What we noticed from both groups is that the majority of the comics that we received back were focused on rape, gender inequality and domestic abuse, child abuse and drug abuse. It was also very apparent that many of the youths had used the comics as a means of expressing things that had happened to them personally, or people very close to them. For us, this further reinforced that fact that we had to be careful to not gloss over these issues and make it seem that we felt that xenophobia was more important. Particularly as we could see that this was the first time that many of the youths had been given the opportunity and the space to work through these issues openly and with others. It was therefore evident that this exercise was the start of a trust building process and that the success of our project would rely upon this trust being maintained. We have not included all of the comics due to their varying stages of completion as well as the graphic and sensitive content that some of them contained. However we have selected a range of them so that you can get a broader sense of the issues that came up. Click on "item details" to find out more about each comic. 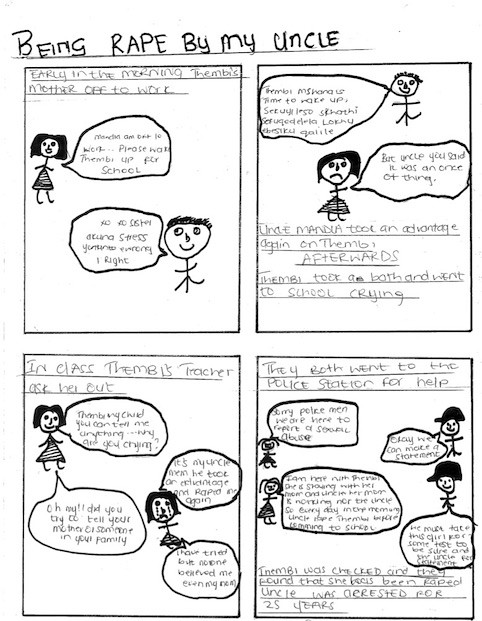 "Being Raped By My Uncle" - The majority of these comics urge victims to seek justice for what has happened to them, as due to victim blaming most rape cases go unreported.
The following link, from a South African Rape Crisis organisation, offers some insight into how South Africa's violent past can be linked to the high numbers of incidences of sexual violence and rape:
http://rapecrisis.org.za/rape-in-south-africa/#causes-of-rape 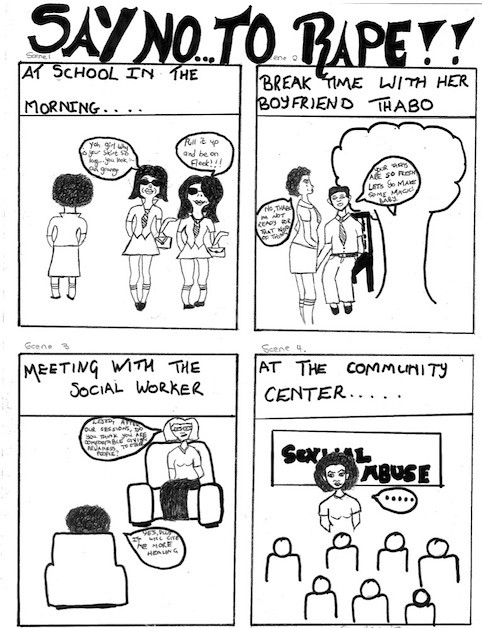 "Say No To Rape" - One of the myths that is often associated with the rape culture, is that victims were 'asking' for it through the way that they were dressed/act. This comic shows how young girls, who are under pressure to conform to popular standards of dressing and behaving, are at risk of falling prey to this particular myth. 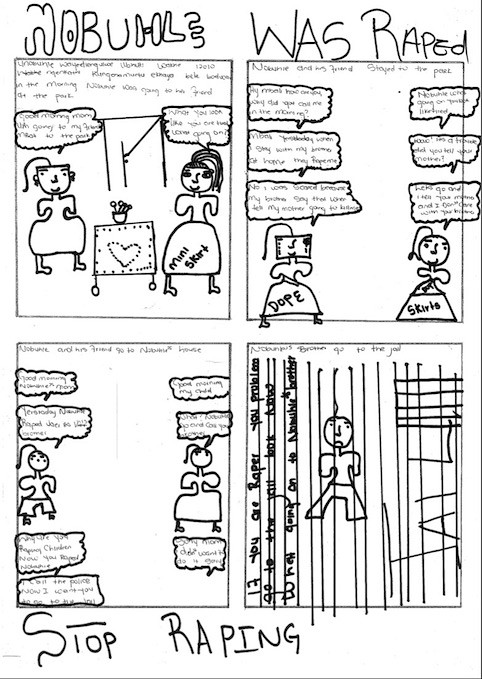 Rape - Although many of these comics end with the perpetrator going to jail, sadly this is not a reality for the majority of the youths. Victim shaming and the fact that the rapists are very often family members, means that most cases go unreported. We noticed that the comics therefore served as a means for the youths to create an alternate reality, where justice was served and they felt safer as a result. 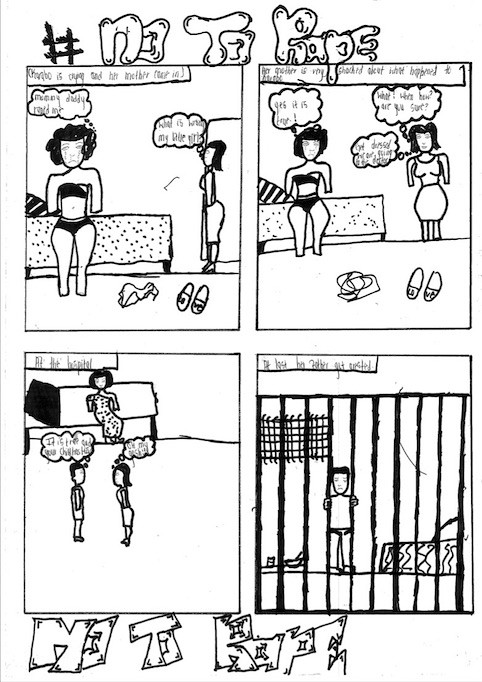 #SayNoToRape has become a popular hashtag in South Africa as more and more women are openly speaking out against sexual abuse. This comic shows a young women being examined for rape in a hospital which subsequently persuades her mother that her father really did rape her, resulting in his arrest. Many youths do not know that rape can be medically proved, so this encourages them to be examined if anything happens to them. 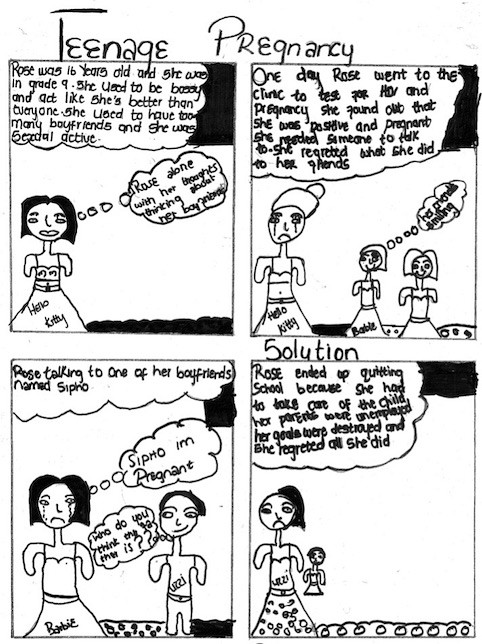 Teenage Pregnancy: This comic warns girls against sexual promiscuity at a young age, as it very often can lead to pregnancy and the young women needing to drop out of school. 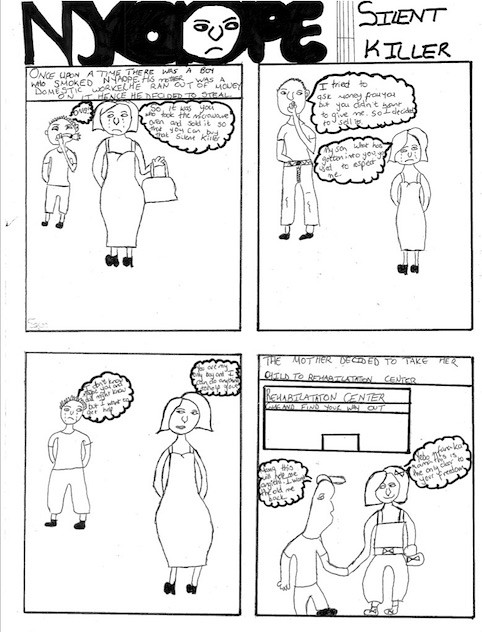 Nyaope - This comic is about one of the cheapest and most, addictive and most common street drugs found in South Africa. It's high availability and low price has made it popular in townships, particularly amongst youths. However it is highly addictive and is having a devastating effect on the younger population.
The following link offers more explanation about Nyaope:
https://www.mobieg.co.za/articles/addiction/types-of-drugs/nyaope-whoonga/ 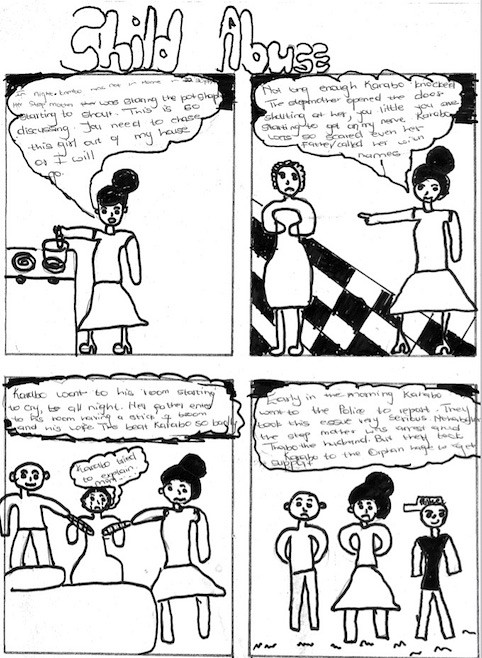 Child Abuse: This topic has been rated as of high importance to address in South Africa due to its extreme prevalence. The following link details the statistics of child abuse:
https://www.savethechildren.org.za/article/violence-against-children-costs-south-africa-r238-billion
Similarly to sexual abuse, many instances of child abuse go unreported, therefore the youths wanted to encourage victims to speak out against any abuse that they may endure so that a solution may be found. 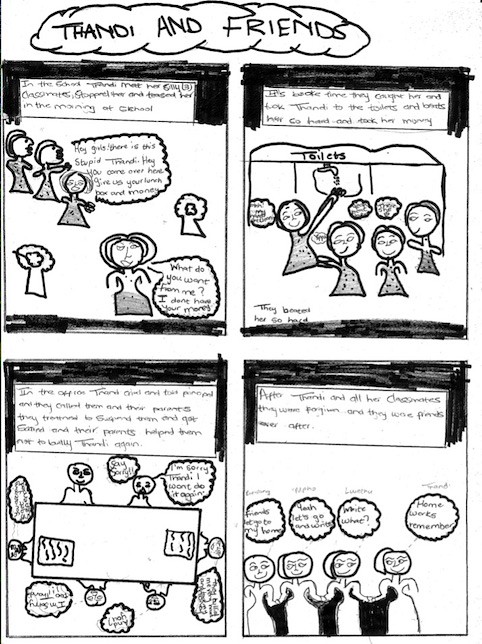 Bullying: This is a common issue that is felt amongst teenagers all over the world, and our youths are no exception. This comic provides an example of how some people could be bullied at school, in this case being beaten up for lunch money. However it also encourages victims to speak up and report such instances to a member of staff so that a solution can be found. 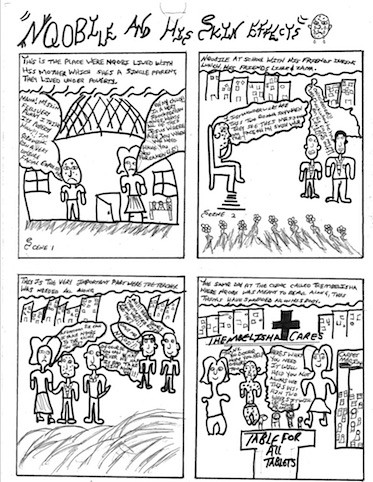 "Nobile and His Skin Effects" - This comic was used as the basis for the film about Nobile's skin. The youths wanted to engage with discrimination in a way that anyone could understand and therefore chose to create a story about a person who was bullied by their peers for having a skin infection like chicken pox. Experiences such as these are relatable to most people and therefore can be considered as a stepping stone to a greater understanding of discrimination. 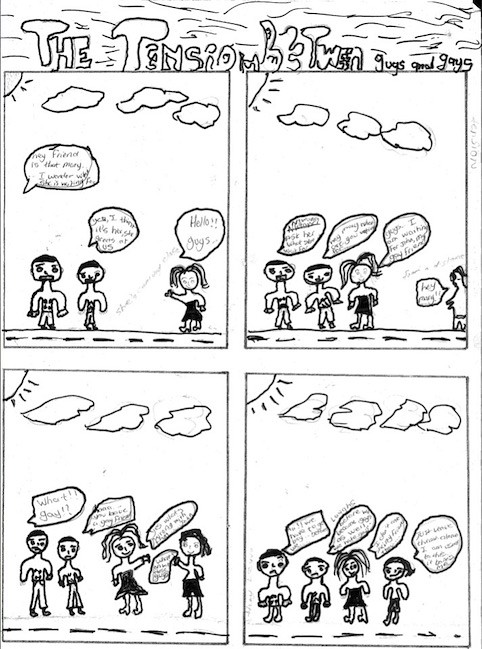 Homophobia: Entitled "The Tension Between Guys and Gays" This comic depicts a girl being criticised for being friends with a gay person, however she soon shows her peers that is just another human being that deserves to be treated with respect. 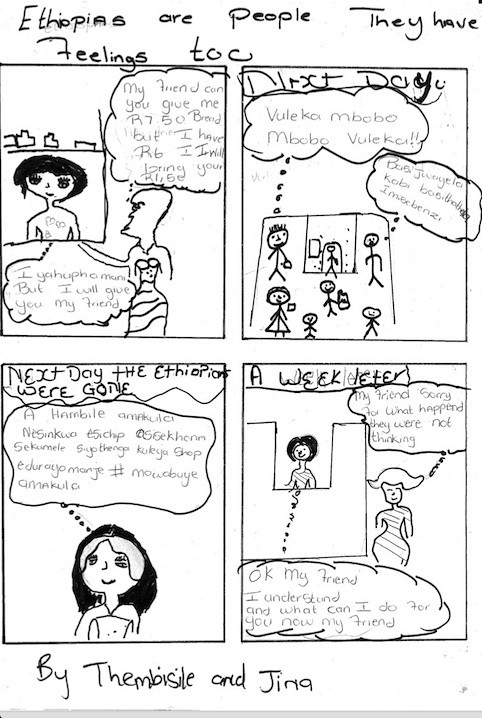 Xenophobia: These youths wanted to encourage others to find peaceful solutions with foreigners instead of using violence, as this way both parties can live peacefully side by side.