In 2017, Learners on Blueberry Academy's 'Citizenship' course worked with researchers at University of Leeds, Explore York (library and archive) and with storyteller Cath Heinemeyer to explore the history of the Melbourne Centre using archive resources.


The photo above shows the original timeline created by the Citizenship group.

We started by making a timeline back to 1905, to give a sense of distance and start to think about what has changed between then and now. 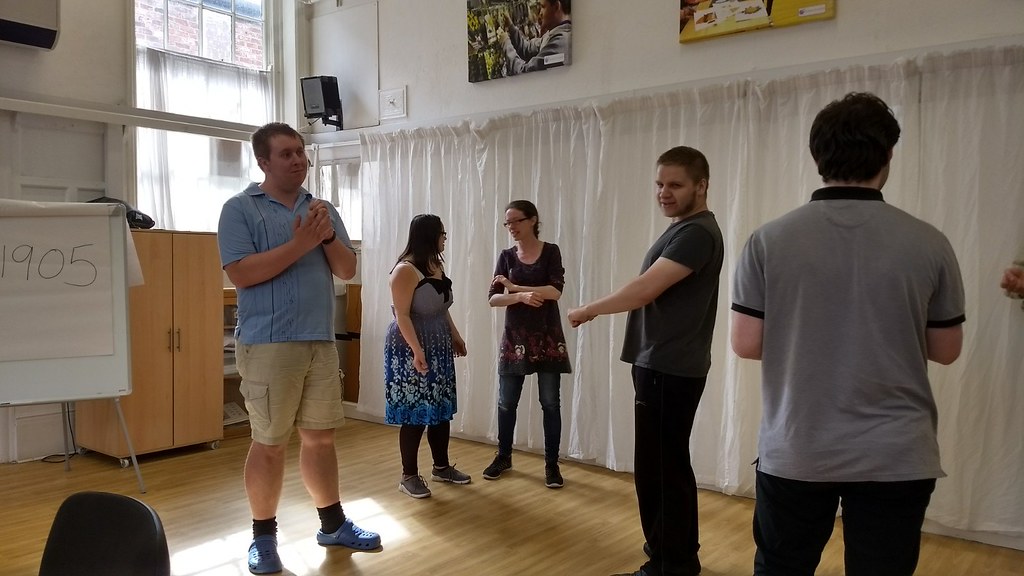 Cath Heinemeyer (centre) challenges the Citizenship group to act out how they think life might have been in 1905.

At the next session, Storyteller Cath Heinemeyer invited everyone to take part in a series of role-playing games to help the group to imagine what life was like in 1905. We began with the question 'Who's the oldest person you know (or have known) and when were they born? Can we find personal links back in time through the people close to us? The group went on to act out a number of scenarios such as 'How my Great Grannie might have....got to school/contacted a friend/spent her free time'. 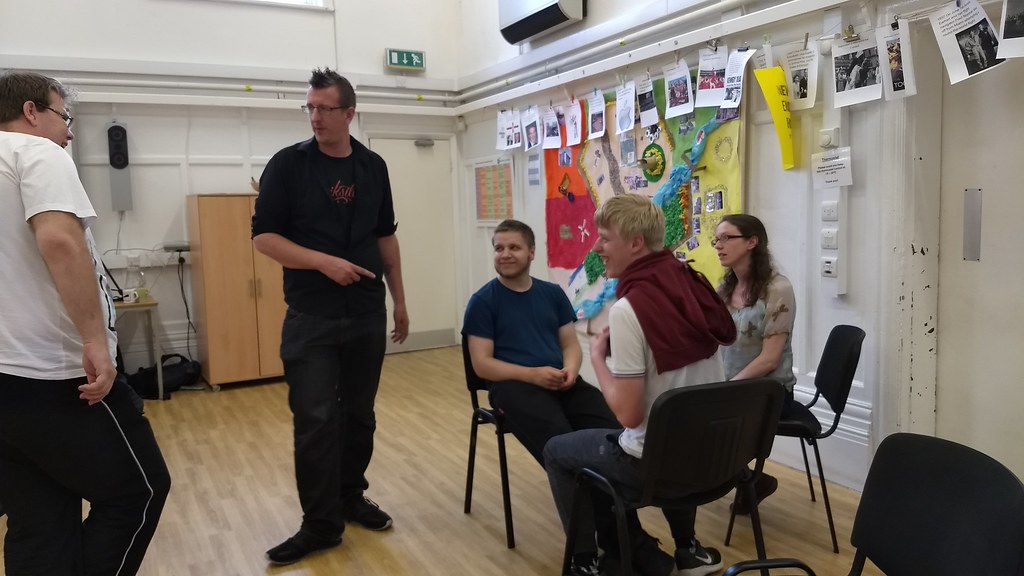 Interviewing each other and responding in character as characters from Fishergate in 1905.

Next, Cath played the part of a young boy who lived in the Fishergate area of York in 1905, relating the story of his life to the rest of the group. Cath's character was fictional but based on her research using archive materials supplied by Explore York. Afterwards, members of the group put further questions to Cath, who responded in character. We then chatted about how we can use our imaginations to bring historical information to life.

Once the learners felt comfortable with the idea of historical role-play and improvisation, we split into pairs and each chose a character who might have lived in Fishergate at this time. Some chose to be the mother/father/brother/sister of Cath's character, whilst others selected occupations such as 'tram driver' or 'barman'. We took it in turns to ask each other questions and respond in character. 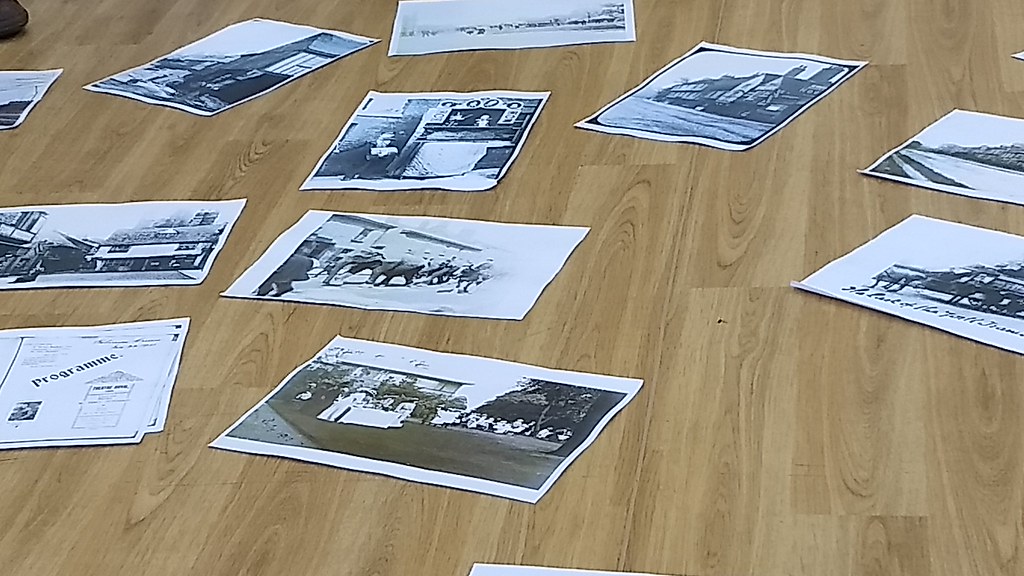 At the end of the first session, we split up into groups to think about what questions we'd like to ask about life in York in 1905. Each group was given a topic such as 'education', 'home life' and 'leisure' and came up with a list of questions to give to Explore York Archivist Laura Yeoman.

Laura took all of the questions away and returned to the next session with images, videos and other information which helped to answer the learners' questions. Many of these photographs can be found on the Imagine York website (https://cyc.sdp.sirsidynix.net.uk/client/en_GB/yorkimages/) and lots of the videos are available on YouTube.

This film by Mitchell and Kenyon doesn't feature York but it gives an indication of what it might have been like to walk down the street in Edwardian England.

Melbourne Terrace Methodist Chapel, which was demolished in the 1980s.

One of the things we kept returning to in our discussions of leisure, free time and education in Edwardian times was the important role played by the building we now know as the Melbourne Centre. Laura explained that members of the local Methodist Chapel's Mens Class had asked the Chapel committee to establish a new building for learning and leisure.

By looking at into the archives* we know that the Mens Institute (as it was known, back then) cost £1066 to build (over one million pounds in today's money), that architects were hired, and that it took a year and a half to raise the money. We know that a special Bazaar was held to raise funds, along with church members’ donations. When the Institute opened, groups started to meet there for lectures, recreational activities and to access the reading room.

*held at the Borthwick Institute for Archives: University of York 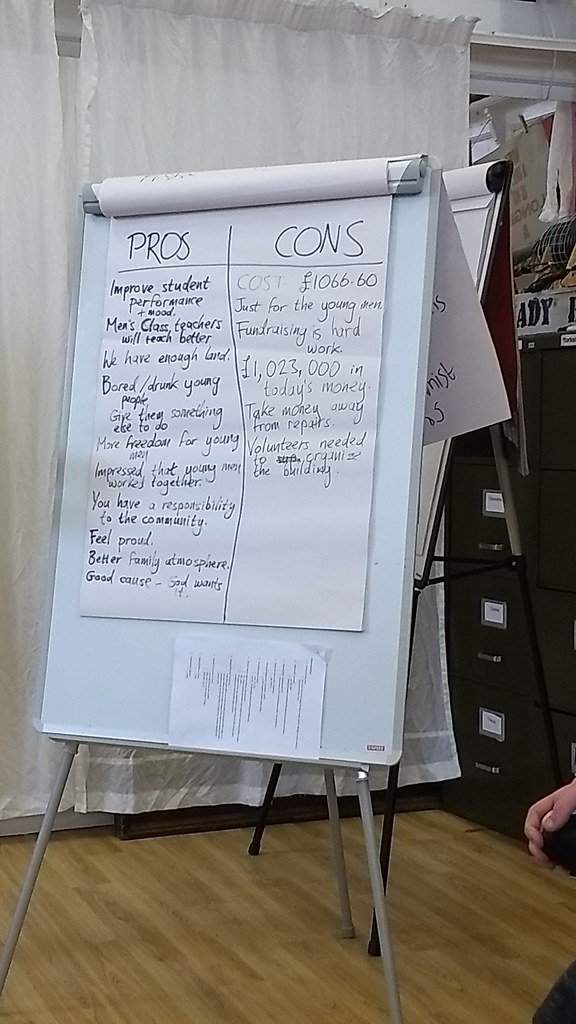 The group's list of pros and cons for founding the Men's Institute.

As a group, we responded to what we had learnt about the history of the Melbourne Centre (that is, the former'Men's Institute') by staging a 'conscience alley'. We imagined that we were members of the Chapel committee considering proposals to build the Institute, and created a list of pros and cons. We then took it in turns to try and work out which way each of us might have voted by listening to arguments on both sides and improvising our arguments both 'for and 'against'. 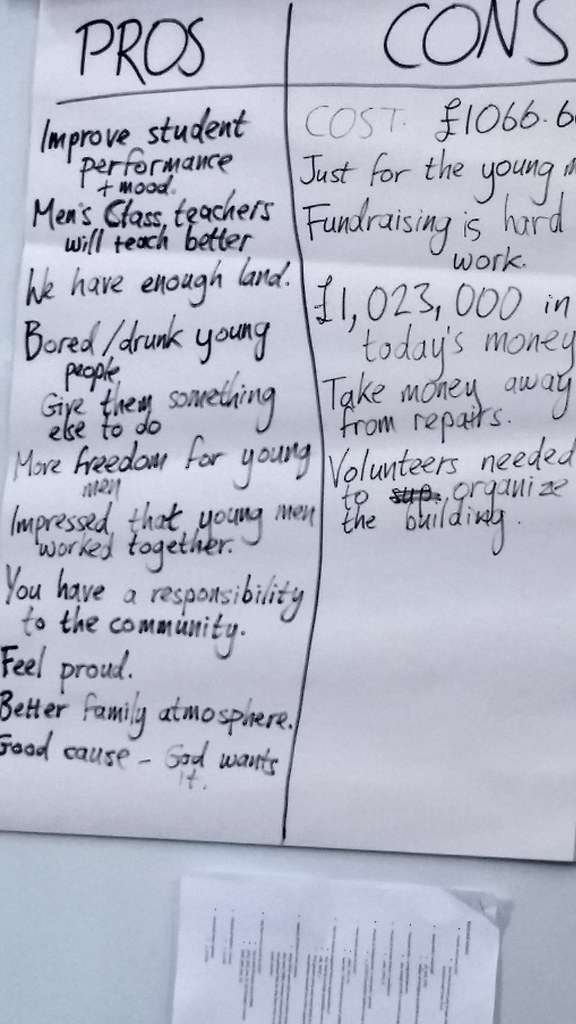 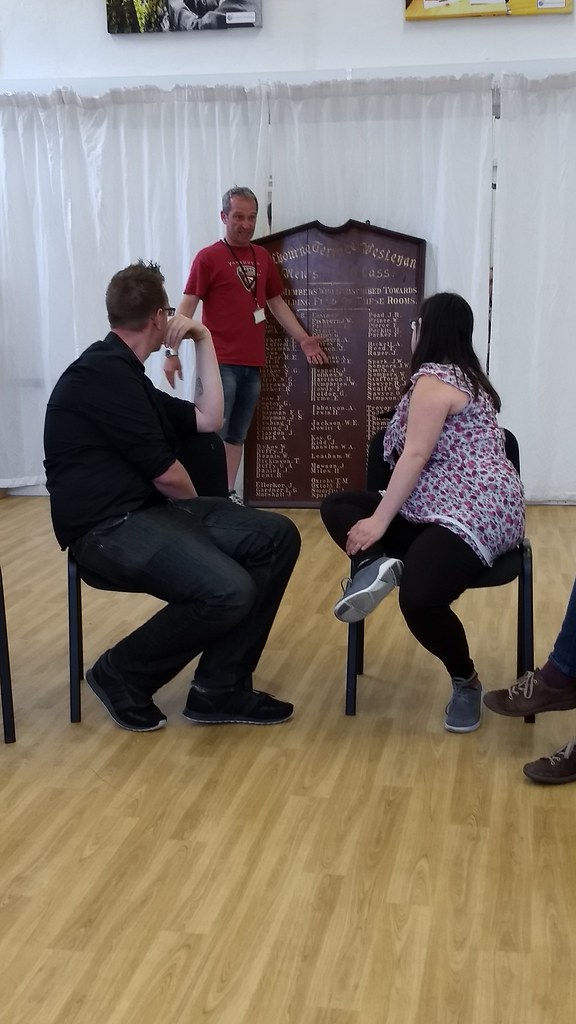 Dave unveiling the funders' plaque, which was found in a cupboard in the Melbourne Centre.

Having spent time imagining the lives of those who might be affected by the founding of the Men's Institute we went on to create storyboards depicting what the daily lives of it's members might have been like. This led into another role-playing interview exercise, in which we asked each other questions about our characters' lives, interests, work and family. 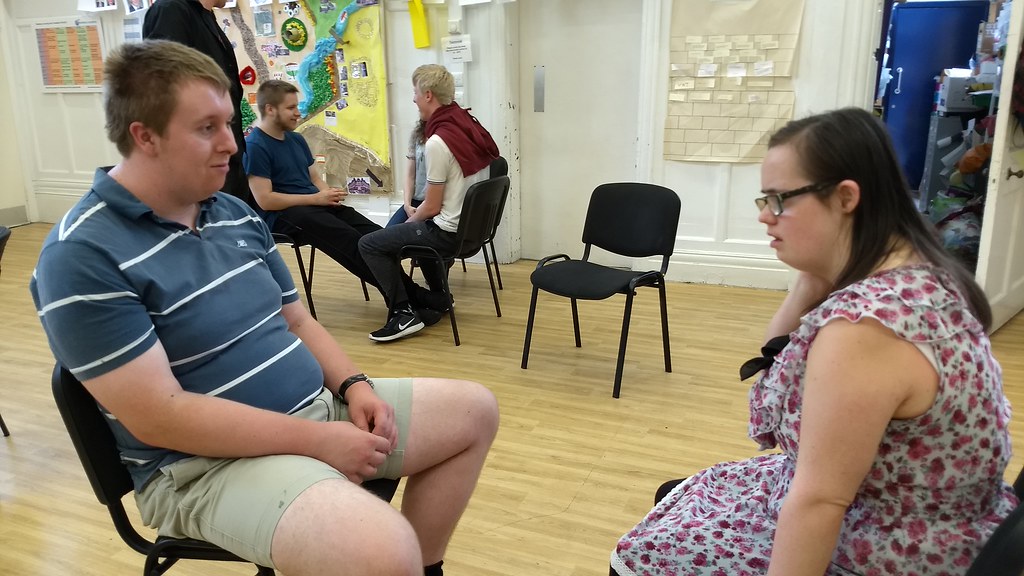 Interviewing each other in character as members of the Men's Institute. 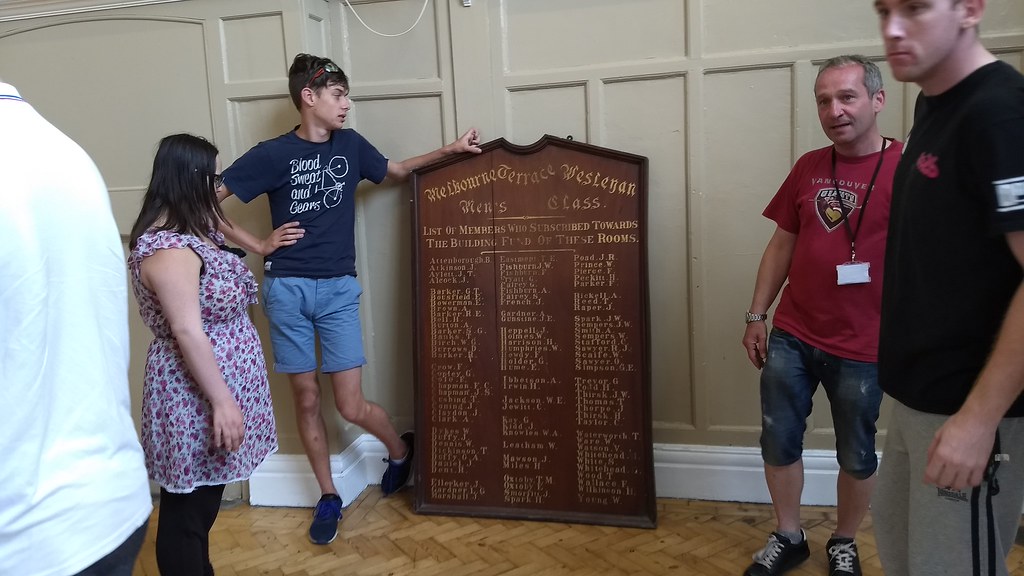 Deciding where to display the list of funders. Previously, the plaque had been hidden in a cupboard!

In order to share what the group learnt about the history of the Melbourne Centre, the plaque will, in future, be displayed on the wall for everyone to see. Blueberry Academy will also be sharing the group's work by creating Yarn stories which can be viewed by other learners, families and the wider community.

Following these workshops, the Citizenship Group made a visit to Explore York's archives and everyone enjoyed it so much that it was agreed to make this an annual feature of the course!