This story starts with a quotation of John's last passage...


I quite like the idea of therapy- admittedly this is a highly cathartic conversation/project for myself and I do hope this is reciprocal in its nature. I believe we share a common want to change something, even if it is unclear how and what form it may take. Yes, I concur with the ‘no fixed rules’. I think my task is not to specifically define the collective, but to draw out nuanced characteristics with which we can begin to gain a greater understanding and to ultimately legitimise practices (and thus languages) which seem logical to artists and creatives within the sector, such as ourselves. This is not to co-opt ‘what we do’ into conventional institutionalised art history, but in fact, to contribute a small change in new knowledges of social art history. It’s interesting that my introduction to your work was through the Rome exhibition and your meta-project "Turbulent Times. Nothing happens in Nice Weather". I immediately recognised a deeper criticism of our current times it’s what set that work apart from the rest of the exhibition. Also, yes by ‘play’ I was referring to a general aesthetic rather than the actual notion that we can entirely be at play, as artists, all of the time. I think that the aesthetic of play is really important in our times as its at once relatable (somewhat satirical in form) by the audience/viewer. However, it simultaneously reveals the interplay between the personal and the political (political, in the broadest sense of those friction points) intention in your work. Yes, I couldn’t help but think of Walter Benjamin when you positioned images as non-singular, it’s about circulation, hit rate and sharing, this is the other side of collectivism which I’m reticent to spend time on as it is probably a whole other PhD. However, it does of course play a role and cannot be ignored. I suppose a post-structuralist would argue that the relationship between text and image creates the illusion of a single meaning.

You know, John, the more we think about "play" after what you've written, the more the concept reveals itself as something far more ambiguous than it is...It's like you seem to grasp it and then it's somewhere else, completely altered in form and substance. Talking of play both as an attitude and an aesthetic...The question that have risen at a certain point is: how can we play and talk about play-asethetics (playful aesthetics?) in the framework of a wider debate about the resources artists, critics, curators, museums and so on can deploy to build an alternative to the present? How can we do that without confronting ourselves with the incontrovertible fact that play is subsumed into a globally spread perspective of gamification of life?
From memes to apps, from consoles to productivity tricks, even the projects of a general basic income...everything seems to point to a society where work will be disguised as play in order to be as addictive as ever.
So, the doubt is whether can we subtract to this logic or not. Or better, should we be amoral? Can we deploy play as a strategy that contrasts the logics of capitalism? Can we get rid of it or should we appropriate of play (in its widest sense) conceiving it as a viral/unfair strategy to produce a sort of reaction/shock?


I read more and more instances of this happening in the daily stream of visual and textual non stop inertia. Art is obviously immersed as much as everything else. I do however, think it plays a vital role in uncovering the mechanics of the system and really ‘good’ art provides a head space to generate thoughts and ideas which may in time help to tackle these issues. I want to come down or up or sideways from this thread now and direct the conversation, again back to you and your specific cultural ecology. Just a simple question for now, I know you probably don’t have typical days, but would you mind indulging me in a specific day you might have recently? How did it pan out? Just on a basic level nothing to in depth. I’m also interested to hear about the ‘scene’ in Milan or Italy in general? Here in Leeds the scene is dominated by the educational and municipal institutions of art. However, there is more and more graduate retention in the city and my friends and I and many other collectives, studio groups, facilitating organisations such as East Street Arts are creating a growing artist-led culture within the city which will hopefully re-address the hierarchical ‘visible core’ of art within the city. Its hard in the north of England to make a living in the sector, most go to London but there are movements afoot. It’s all very siloed still though with the obvious art market driven glitterati still holding the majority of the big bucks.

Our typical day. . . . . . . . .
when we still were renting a studio space (we are looking for it at the moment) we met in the studio around 9.30 and then started. It depended on the day: sometimes you had some commercial work to finish so there was no talking at all. You just entered, waved a hello, and turned on the computer. The first who arrived chose the music. At first we had the bad habit of smoking in the studio, it looked so Mad Men, but then Nico became a vape-man and accordingly smoking became forbidden.
Lunch was always quick and easy. Pasta most of the time. Then another 4 hours of postproduction or video editing and then we went out to see some gallery openings. But, as said before, it really depended on the day. If we were working hard on a project or exhibition, there were no working hours and the studio was a mess. When we were creating the Meditation Rocks series, we were burning things and the studio floor was covered with sand, rocks and other stuff. It was a mess, actually. You couldn't do anything but producing those stones those days.
Now we work separately. It's a momentary solution, but it's a nonsense to rent a co-working desk or something like that. We are looking for a cheap and flexible space, which is something rare in Milan.
As a city, Milan is probably the only place to be in Italy if you don't want to leave the country and still work in the art system. Rome is disconnected and overwhelmed by archeology and bureaucracy, in Venice everything is swallowed by the Biennale and so on...Milan is probably a good compromise between a ugly city, a place designed only to work, a City (business), building speculation, and connections with the rest of Europe. Turin is far more interesting in our opinion, but it's smaller. On the one hand it's easier to create connections there, but it's not active as Milan.
Milan is a stratification of different games, different circles, different networks. 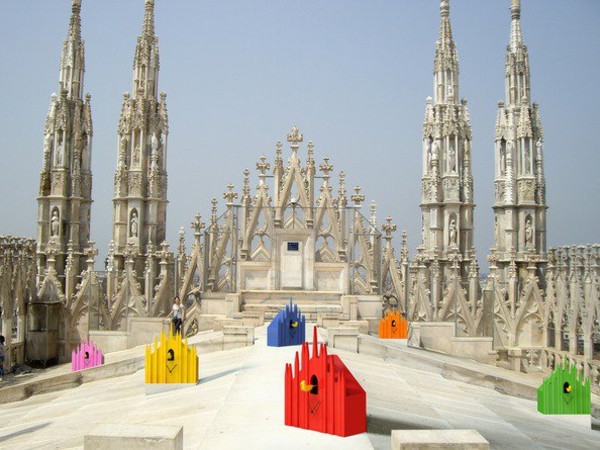 In Milan you have the big galleries, a constellation of mid-class galleries, the art institutions (Hangar Bicocca and Prada Foundation for instance), the public institutions, and a growing fauna of independent spaces, small galleries, bookshops, hybrid spaces, all presenting good works in general. However we're still far from the creation of a network.
For example, talking about the Anthropocene debate, Italy is a bit late on it and now the word is becoming trendy, so someone is trying to organize a bit of material in order to provide a proper education or introduction to the theme. The point is that the activity of translating and making contents available, of generating debate, is always and still seen as competition. So you have a small group in one region of Italy doing that, another in Milan, one in Turin, another in Rome...That's a problem that you can find everywhere in Italy but especially in Milan. It's frustrating and tiring.
But, anyway, Milan is growing and it's quite good to live there, even if it still needs a lot of work to be something like Berlin.


‘It's an osmotic entity that welcomes contributions and tries to understand how to build a fertile exhibition model that can't be reduced to a list of artworks without any relation with the space or among them’. This is fantastic – my hypothesis and argument within my phd is that artist-led collectives are creating heterotopias, spaces for new forms of curatorial and artistic hybrids to occur. They almost erode or erase the very terms I am using. I’m fascinated with Poiuyt as a meta-project. Do you have any future plans for Poiuyt? I know from what you have said, and my own experience of these ‘type’ of projects that they are often develop entirely through the social relationships within a group (we can perhaps extend this to all discourse) and don’t conform to a specific organisational structure. However, I wondered if you had an practical plans on your next steps? I may have more for you, but for now enjoy.

The first thing we need to do is to catch up. We need to talk and discover each other better than we already do. We have been proposed some exhibitions, but they are not fixed yet. Radio POIUYT also gained a lot of good reviews and there are some requests. So, we need to understand exactly what we are going to do, in terms of an action strategy. We don't like so much to distinguish between roles, but what will it mean to make an exhibition as POIUYT as it grows and gathers more and more contributions? Will we be able to question the term "exhibition" as we want to do?
There's a lot of talking and discussing, now, in front of us...that's all we know for now :D

But, there's a question for you. As you may have noticed, we're contradictory because we alternate moments of great excitement with days in which we strongly criticize our role, our utility, our purpose as artists. Perhaps these two sides coexists always in everything we do, even if we sometimes express one or the other.
We were interested in understanding the aim of your research, because, according to the things we have discussed so far, it's not just an interest toward how an artistic collective works, but something more. It seems that the artistic collective may become a paradigm or an association model. If we're wrong, please, correct us!