My maternal grandfather, Kenrick James Lewington (Ken), lost his life on HMS Barham, when it was torpedoed on 25 November 1941. I've begun these threads, as I'm keen to glean more about Ken in the context of my own family history research, as well as to understand what the sinking meant for the British imaginary, both before and after the war.

This footage was recorded by a Pathe cameraman, John Turner, who was aboard HMS Valiant. It couldn't be shown publicly until the end of the war.

Barham was a British battleship, and part of the Meditteranean Fleet. On 25 November 1941, alongside HMS Queen Elizabeth and Valiant, plus an escort of eight destroyers, it was travelling to cover an attack on Italian convoys, when it was hit by three torpedoes from the German submarine U-331. 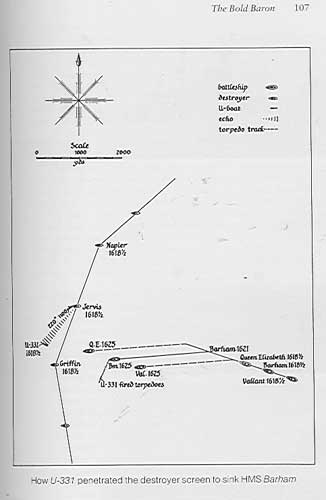 "How U-331 penetrated the destroyer screen to sink HMS Barham."

The German submarine U-331 was commanded by Lieutenant Hans-Dietrich von Tiesenhausen. The torpedoes were fired from a range of only 750 yards providing no time for evasive action, and struck so closely together as to throw up a single massive water column (see the Pathe footage in the previous passage).

Leading Telegraphist A.R. Bacon remained at his station following the first attack to alert accompanying ships of the presence of U-331, which greatly aided the search and rescue. "HMS Barham on her beam ends as the magazine explodes."

As the battleship rolled over to port, her magazines exploded and she quickly sank with the loss of more than two-thirds of the crew. Out of a crew of approximately 1,184 officers and men, 841 were killed, including my grandfather. Survivors were rescued by the other British ships. 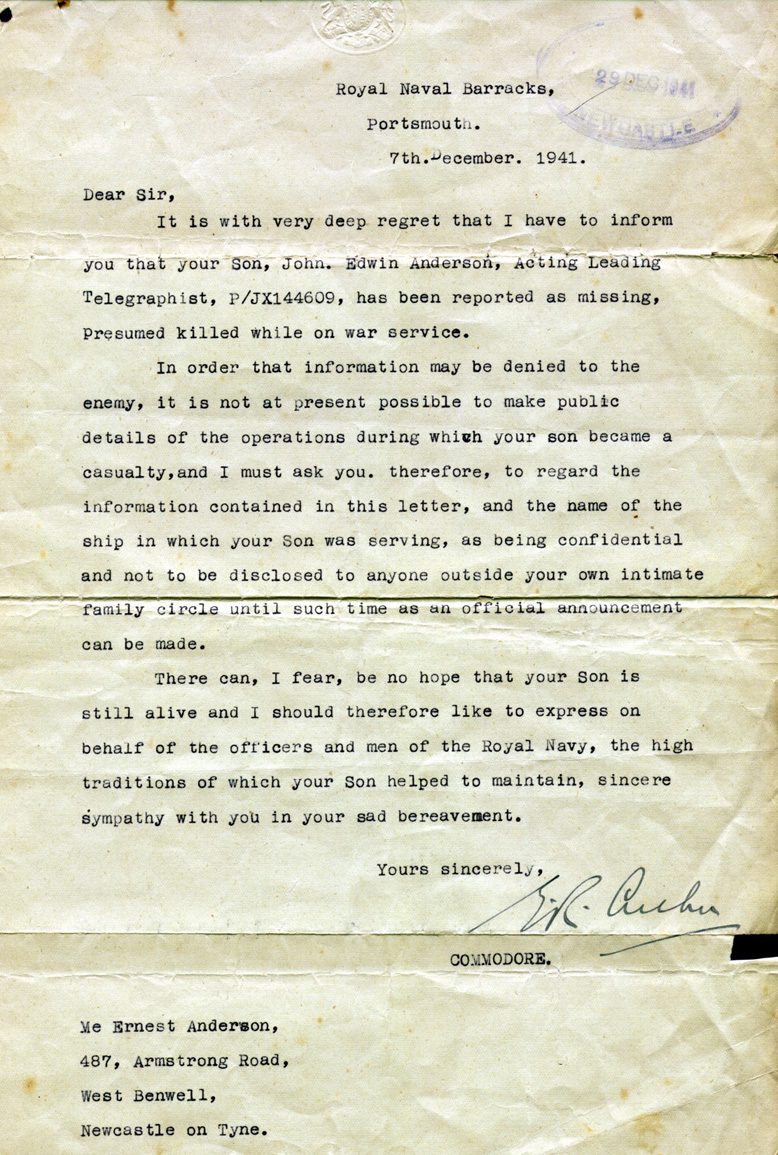 Official letter from the Commodore of the British Navy to Mr. Ernest Anderson informing him that his son, John Edwin Anderson, Acting Leading Telegraphist, has been reported missing and is presumed dead. Full details are not given.

Taken from The HMS Barham Association website, the letters section.

The Admiralty was immediately notified of the sinking. In an effort to conceal the sinking from the Germans and to protect British morale, the Admiralty censored all news of Barham '​s destruction. After a delay of several weeks the War Office notified next of kin, but they added a special request for secrecy: the notification letters included a warning not to discuss the loss of the ship with anyone but close relatives, stating it was "most essential that information of the event which led to the loss of your husband's life should not find its way to the enemy until such time as it is announced officially..."


Unknown survivor 1 I had just come into the charthouse when it happened, I did not see your husband again, In the next few minutes which was all the time that was left to us. I feel that if I could tell you my experience it would let you know what happened. I recorded all my reactions as well as all the technical details in my official report, so I have the memory well fixed. The times were not mine. The whole thing only lasted between four and a half minutes. At 4.26 I was in the charthouse on the bridge when there was a violent explosion and the ship shook. I thought it was a bomb and rushed out of the charthouse for the air defence position just above the bridge. By this time we had a list of about 8 degrees to port, I reached the A.D.P. in time to see the submarine break surface about 150 yards away. I treid to get some guns into the submarine but couldn't. So far the ship did not appear to be going but soon after the submarine submerged (a matter of seconds only) I noticed that the port side of the boat deck was awash. This meant nothing could save the ship. I wanted everyone to put on their lifebelts and stand by to abandon ship. When the men had gone down I found that it was too late for us, the ship was going over too quickly. I sat on the starboard side of the A.D.P with M.C. and a rating and we waited. In a few moments we were under water and swirled about quite out of control. The next thing was four ropes (signal halliards) round me and I was released. Then started the long uphill swim, on the way I thought of taking off my clothes but decided not to. There was no time and the light seemed so far away. Just after I had taken my first mouthful of water I found myself in absolute darkness and silence. I had not read of any such sensations in drowning, but found I could breathe easily, and got in three deep breaths before I was swirling in water again and swimming up towards the light. At this stage I thought of taking off my shoes but decided not to again. After this my memory is not continuous. I remember being trodden on under water and knowing I was near the surface but was unable to find room for myself. Then I remember being swum over. I was not struggling at this stage but just drifting pleasantly. I resolved to tell the men to keep quiet and save their energy if I got to the surface. I went under once or twice but someone got hold of my arm and as soon as got my breath I was able to find a fender to hold on to. We had over an hour before we were picked up, with an airraid to help. As the Hotspur had about 350 of us including many seriously wounded, she left after darkness when everyone had been picked up but Jervis and Nizam stayed till daylight looking for more survivors and found none. Some of our cruisers passed through he oil patch and wreckage later in the day and also saw nothing, so I am afraid that your husband has gone over with 870 of his officers and men. M.C. had much the same experience as I had except that he only got one breath in the bubble. For this is what it must have been. The rating with us did not survive. I hope this will not distress you, but although the experience sounds terrible at no time did I fear pain but rather was I disappointed that the end should come. As I said I was drifting pleasantly, it was just like the sensation when one is nearly asleep… to relax a little and it would all be over. But then I had just the reached the surface so it would mean starting again. A survivor from the Duchess told me the same thing when we had just picked them up. In fact it is so easy to die, at that stage and so end the struggle for life.

From Survivor Stories from HMS Barham